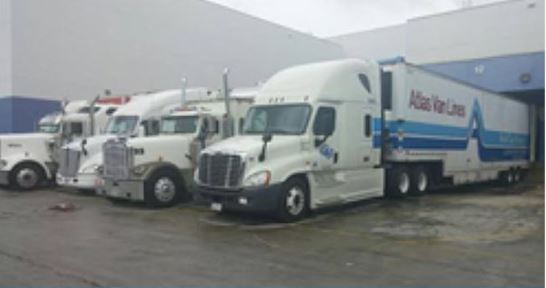 There are an estimated 500,000 police-reported crashes involving large trucks annually in the U.S., according to a study by the Federal Motor Carrier Safety Administration. Baltimore, MD-based moving company Advance Relocation Systems is celebrating National Safety Month in June. Safety is a critical aspect of operations for the company. In keeping with that level of importance, they implement a number of safety measures and protocols, designed to benefit drivers, staff and clients.

When Dalton Conklin became President of Advance Relocation Systems (ARS) in 1987, he set out on a mission to create a safe environment, which would ultimately add substantially to the company’s bottom line with reduced insurance premiums and lower out-of-pocket expenses.

Each truck is outfitted with multiple devices to track speed and safe operation. Their trucks have dash cams on each side, facing backward, and a third cam is located at the front of the truck, facing forward. These cams record follow distance, i.e how close the truck comes to the other vehicles, as well as the speed limit. They also have GPS systems that monitor the location of the truck at any time, track the speed limit and detect when the truck departs its travel lane.

Each truck is also outfitted with an Electronic Logging Devices (ELD). In February 2016, the U.S Federal government issued a regulation that states that operators of commercial motor vehicles will be required to use ELDs. At Advance Relocation Systems, the process of outfitting all trucks with ELDs began in 2015 and they have been fully compliant with the federal government’s ELD mandate. ELDs are mainly used to record Hours of Service (HOS)—the number of hours a commercial driver spends driving per day, and how many hours they’re on-duty and off-duty per week. HOS are regulated by the federal government to ensure that drivers aren’t sitting behind the wheel for several hours at a stretch, which can be physically tiring and lead to increased accident rates.

Advance Relocation Systems also has its own in-house Safety Director. This position has been a stable fixture in the company for the last 20 years. At ARS, they choose to be proactive about safety. Their Safety Director helps to educate all of their staff about the proper operation of equipment and devices, and their physical safety on the job.

In addition to these measures, Advance Relocation Systems is part of a select group called an insurance captive. The captive is a semi, self-insured group including 26 Atlas agents who focus on accident prevention and risk management.

“We've always been proactive. We do anything and everything to prevent accidents from happening, both with our vehicle fleet and our staff.” — Dalton Conklin, President, Advance Relocation Systems

Advance Relocation Systems strictly follows the Department of Transportation’s regulations and other federal safety guidelines. The company has an annual safety meeting and monthly internal communications to reinforce their safety initiatives. While incidents are few and far between, when they do occur they are used as teaching moments. Advance Relocation Systems’ employees are educated on an ongoing basis and certified on safety protocols. After more than 80 years in the industry, ARS always strives to maintain the highest standard of professionalism and skill expected of a moving company of their caliber.

To learn more about Advance Relocation Systems and their moving and logistics capabilities, contact them directly at (410) 574-8900.