If you’ve worked with Advance Relocation Systems anytime within the past 25 years, you’re sure to have met or heard of Dalton Conklin, our company’s current President. With decades of experience in the industry, he is the third generation of our family-owned and operated business. In this article, we take some time to get to know Dalton a bit better and find out what motivates him to continue his family’s legacy.

As is the case with many family businesses, Dalton grew up in the business under the tutelage of his father. As a boy, he watched his father take over running the company from his grandfather and he eventually did the same. He began working in the business at the age of 10, over the summer when he was out of school. After leaving high school, he committed full-time to the business and began preparing to take over the Conklin family’s legacy. But Dalton hasn’t spent his entire life in the business. He ventured outside of the company for 5 years in the 1980’s where he worked in the transportation industry - which was still a very similar industry. As the saying goes, “home is where the heart is”, so Dalton eventually returned to his ‘home’, i.e Advance Relocation Systems.

Having been in the driver’s seat for a while now, Dalton has had the opportunity to develop the company in unique ways. When asked about some major accomplishments during his leadership, Dalton narrowed it down to when the company got into the climate controlled art transportation business 13 years ago.

“It’s been a solid growth force since the day we started it, it's been relatively recession proof, and it's a niche that not a lot of competitors serve that area of business, so I think that's probably the single best business decision I’ve made in my working life.” - Dalton Conklin, President of Advance Relocation Systems

For a relatively small company (with only 25 actual staff members), Advance Relocation Systems has made a name as a large company in terms of capacity. Just two years ago, we were named the 13th largest volume producer out of over 300 Atlas agents, and in 2019 we won the  5th Place Volume Producer with a Single Location Award. Dalton has committed himself to building a quality, consistent and financially strong organization. He’s very proud of the company’s ability to retain employees in an industry that has such high turnover, noting that many of our employees have a tenure of 15 years or more with us.

What do you love most about working in the moving industry?

What are some areas of the industry that you’d like to see changed?

“Well the number one problem the industry has is the driver shortage. Not so much just drivers but drivers that are willing to do this very difficult, hard job of physically moving. A lot of younger individuals today, they don’t want to physically do the work, they just want to drive the truck, see the country, and go from point to point. Added to that, the newer people that are coming into the workforce and the millennials have less stuff whereas the last generation had a lot of items to move. So the moves are getting smaller, and it’s getting to be more of a challenge to get a truck fully loaded to and from different locations. I honestly don’t know if that’s ever going to change, in fact, it may get worse but because we’re so diversified it doesn’t impact us as much as it does the industry.”

On the personal side of things, Dalton spends most of his time with his wife Charlene - who also works at Advance Relocation Systems. They enjoy riding motorcycles, golfing, taking their boat out and just generally spending time together. They have 2 children - a daughter, Morgan Kohler, who’s an aeronautical engineer and pilot in Okinawa, Japan and a son, Tyler Conklin, who works in the company as an over the road tractor-trailer driver. Dalton describes himself as honest, motivated and a joy-seeker. He says the influences of his mother and the businessman he worked for in the 80’s are hugely responsible for the person he is today. He values ethics and honesty in everything he does. 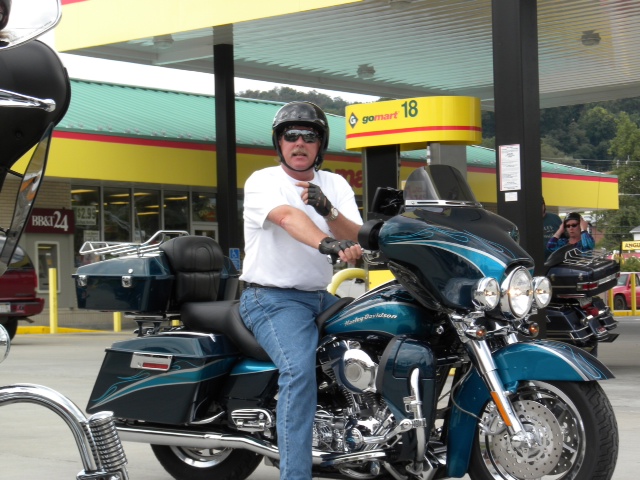 Even though he is President of the company, Dalton is present everyday at Advance Relocation Systems, on the ground, making decisions and interacting with employees. He’s invested in finding new ways for the company to improve and  become more efficient. He keeps up with changes in the industry by utilizing new programs, hardware and software that could make our jobs easier. “As an organization, we’ve always had paperwork and a lot of it for the moves we do, and we were one of the leaders within the Atlas system to press them for electronic tablets to have for our drivers for the paperwork and inventory control.” He also spearheads the attendance of management at conferences, seminars and conventions where they have an opportunity to educate themselves and learn everyday. He’s always open to communication and if you’ve got a question or concern, you can definitely knock at his door!