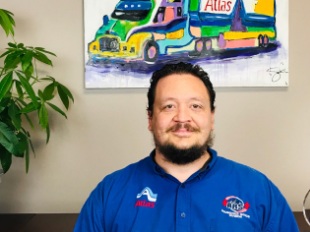 Ray Rodriguez hasn’t always had an easy life, but by watching his mother and step-father raise him and his 4 siblings in the inner city of Baltimore, he learned that hard-work is the key to success and it always pays off. When our Warehouse Manager was out sick with Covid-19 last year, he stepped up to the plate to ensure that our warehouse operations continued as smoothly as possible. Afterwards, our management team received a lot of positive feedback about Ray and pushed for him to be promoted so Ray was then named the Assistant Warehouse Manager.

Ray first joined ARS in the 90’s after working at a company that manufactured bowling balls. At the time, his step-father was working at ARS as a Manager so he recommended him for a summer job after staff started getting laid off at Ray’s previous job. Ray started with an entry-level position in the warehouse and over time, gradually received training in other areas and was tasked with more responsibilities. After a 4 year hiatus working as a driver for a different company, Ray returned to ARS in 2007. Over the years, Ray has developed good relationships with the office staff and truck drivers. He spends his days at the warehouse assisting the drivers by packing, helping move and clean off trucks, unload trucks, and assisting the Warehouse Manager with other tasks.

Childhood was not the best or easiest experience for Ray. Growing up in a low-income area with four siblings, he saw how hard his mother and step-father worked to ensure they were provided for.  Ray went to public school in Baltimore City, however, when he entered high school, his parents decided that the school was not of the best caliber so they gave him the option of quitting and getting a job or going to Job Corps and he chose Job Corps. He went on to earn his GED at the Job Corps. For those who aren’t familiar with it, Job Corps is a voluntary program administered by the United States Department of Labor that offers free-of-charge education and vocational training to young men and women ages 16 to 24.

Now, Ray is married with a 4-year old (soon to be 5) son and they are currently expecting another bundle of joy in November (2021). When he’s not working in the warehouse, Ray enjoys spending time building his Mustang with his step-father and brother. His son is also now at that age where he comes out to the garage and joins them, sometimes even grabbing a tool to help.  Ray describes himself as a funny, hard-working, and reliable person and these are qualities he brings to the warehouse each day. Most people are surprised to learn that Ray is actually a big fan of anime. He believes that having a positive and respectful attitude is important. Ray stressed that there’s no easy road in life, we simply have to work hard and hope that it will get noticed but we should never expect things to be handed to us. We are super happy to have Ray as part of our team and we extend a hearty congratulations on his promotion to Assistant Warehouse Manager!